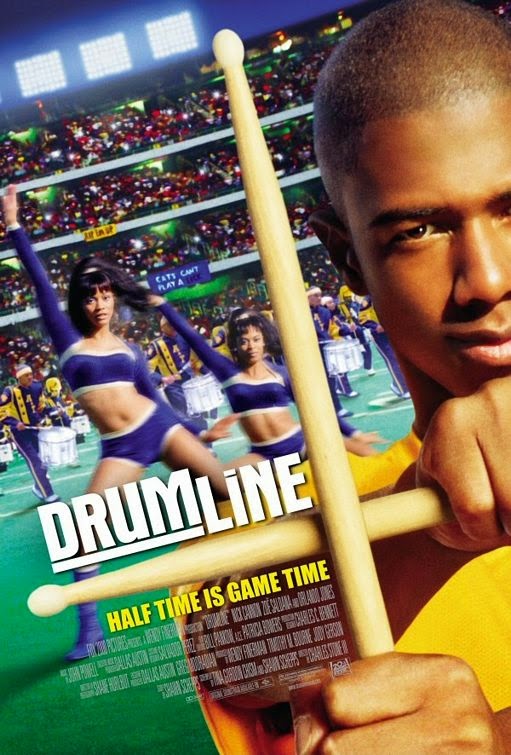 We all have those movies that are really bad but for some reason we always love watching them. Drumline is one of  mine.

Before Nick Cannon was the prolific host of bad shows and pre-dating his marriage to the Queen diva herself, Mariah Carey, he used to star in a couple movies. He never really hit it big in the film business and the industry has thrived because of it.

Nick Cannon plays Devon Miles, a drummer in a marching band that doesn't follow the rules. That is all you need to know.

Zoe Saldana as Laila in one of her first lead roles (because sharing the spotlight with Britney in Crossroads clearly does not count) is charming as she rebuffs Cannon's Devon Miles time after time. The fact that she does eventually give in to his so called "appeal" is simply a knock on her character and the writing, not her as a person. We give that personal knock to Mariah.

This movie is in the same vein as Bring It On but Cannon is even more abrasive than Kirsten Dunst and doesn't have the incredible Eliza Dushku to back him up.

Orlando Jones, along with the lovely Zoe, are the best parts of the film. The drumming is decent too. Although Jones is most well known for his comedy, he steps into a more serious role pretty well. He's not going to be winning any Oscars but compared to Cannon, he's Sidney Poitier.

If you take any part of this movie seriously you're going to give yourself an aneurysm. It may just be an expression but Nick's bad acting is a force to be reckoned with. Just add it to your bad movie marathon list.

Okay so I've been ragging on Nick Cannon and his faults a lot during this post.

No that's it. You didn't think I'd say something nice about him, did you?

Looking for his redeeming qualities? Yeah I'll let you know when I find one.