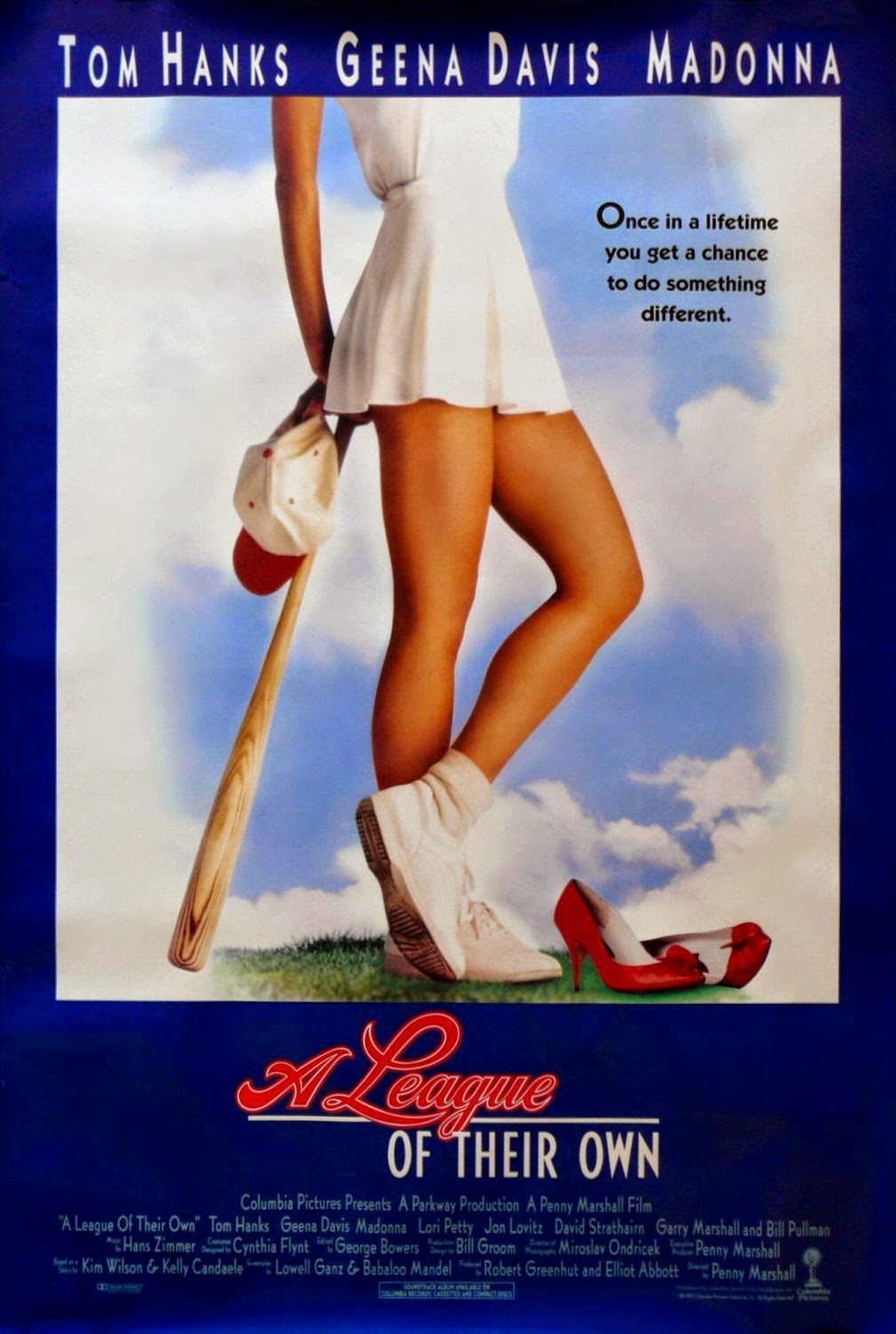 I had a bit of a late start on watching today so this one will have to be a little short.

I've been getting around the see some great movies like A League of Their Own and others I've missed over the years and this challenge has been doing me some good. This was director Penny Marshall's second collaboration with Tom Hanks after 1988's Big.

It's 1943 and baseball is at serious risk of folding due to WWII but chocolate mogul Walter Harvey (Garry Marshall) decides to have to women in baseball. Hanks plays Jimmy Dugan, a washed up former baseball great who wasted his twilight years feeding his alcoholism. He gets an opportunity to manage the Rockford Peaches, a team in the newly founded All-American Girls Professional Baseball League. Jon Lovitz always plays the same character and it's great every time. He is a wise cracking, quick with an insult scout looking for fresh faces and good talent. Sadly, we see far too little of him and he's gone just as quick as he arrives. There are plenty of great personalities trying to fit in with the team. Marla (Megan Cavanaugh) is not the easiest on the eyes but is quite the hitter. Mae (Madonna) and Doris (Rosie O'Donnell) are best friends. Mae is a little too....free with her body and Doris is more of the loud mouthed muscle. Evelyn is prone to error and has a child so annoying you want to smack him with an encyclopedia. He might just learn something this way. The two that the story starts with are Dottie (Geena Davis) and her younger sister Kit (Lori Petty). Dottie is soon exposed as the star of the league inadvertently eclipsing Kit at every turn. Jimmy tries to find his way back from his drinking to actually manage the team but it takes time. The Peaches start to really take off but after an altercation between Dottie and Kit, Kit ends up getting traded to another team. These issues all get dragged out when their two respective teams meet at the World Series.

This is a fictional dramatization of historical events. A lot of what you see in the film are played up and exaggerated but were actually enforced at the time such as charm and beauty school, playing in skirts, and wearing make up during games. All of the injuries or bruises shown in the film were actually injuries sustained by the actresses. Watch out for a huge bruise after a slide.

From a quick peruse of the literature, Dottie and Kit were more or less modelled after one person. Dottie Collins was an All-Star pitcher in the league for 7 years before retiring to start a family. Elements of her game can be seen as Davis' character was the back catcher and Petty's played the pitcher. Davis' character quit after one year but Petty's went on for some years.

Any time Hanks and Davis were in a scene together is was gold, other parts of the movie sometimes felt strained or forced but overall entertaining. My favourite scene is when Jimmy Dugan is trying to keep his cool after another error by Evelyn jeopardizes the World Series game. It is wildly entertaining and I couldn't help but laugh.

In short, go watch it, it's fun and still historical. Almost midnight, got to run.