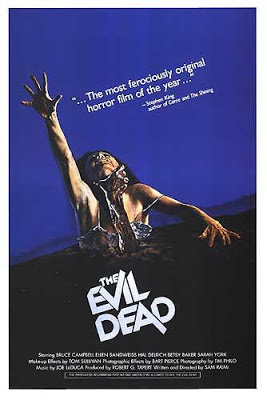 The Evil Dead is the first part of a horror-comedy cult classic trilogy of epic proportions. From the mind of Sam Raimi, director of such movies as the Spiderman trilogy and Oz the Great and Powerful, this movie gives you the creeps in the way only the 1980s pre-computer effects can.

Seen Cabin in the Woods? It has that sort of feel to it, but more old school visuals.

Ashley "Ash" Williams (Bruce Campbell) and his friends Scott, Linda, Shelly, and Cheryl are off to a cabin for spring vacation. They see rather ominous signs as they approach the cabin but don't really think much of it (as is fitting of the horror genre). In the basement they find a Sumerian "Book of the Dead" and a recording with demonic incantations. All sorts of eerie and spooky stuff start happening and the five college students are sure to have a Spring Break they will never forget.

It's not an overly frightening movie but it is rather strange and disturbing in some parts. There is a moment where a girl......how do I put this gently.....literally gets raped by trees. Nope, no way to make that sound any better. Anyway, it's meant to be freaky more than it's trying to be perverted....I think. You might have to ask Sam Raimi on that one.

Everyone has seen but sadly fewer people remember Campbell. He has a lot of small parts in movies and brings a lot of his signature wit, charm, and comedy no matter how short the role. Sam often casts his younger brother Ted and Bruce in many of his films. They have appeared in the entire Evil Dead trilogy and the Spiderman trilogy. They also played recurring characters on Xena: Warrior Princess and Hercules: The Legendary Journeys

This is an old draft of a post and I'm cheating a little bit on this 100 day challenge but whatever. Since I started this post I've seen the next two instalments Evil Dead II (my favourite) and Army of Darkness and at some point I'll be letting you know my opinions on those two.

This movie is a great part of horror's past. If you haven't seen it I'd definitely recommend it but if it's not your style then I won't hold it against you.

Note:
- I didn't know this movie existed until it was referenced in an episode of ReBoot. It is one of my favourite episodes of a show that probably sparked my casual interest in computers.