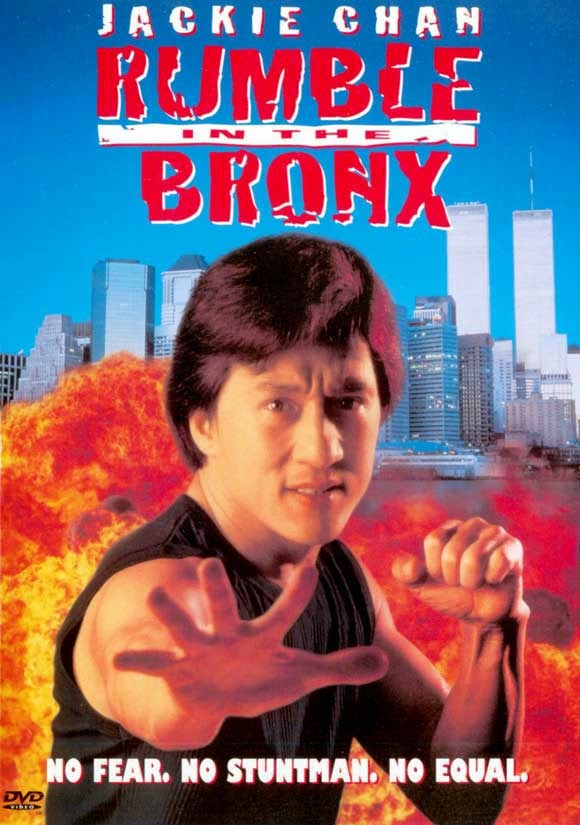 I'm a day late on this one but it was bound to happen eventually.

Rumble in the Bronx is one of the most action packed and I think the first Jackie Chan movie I can remember growing up. This was the movie that gave him his big break in Hollywood in 1995 and he didn't look back until his mid-50s.

I didn't watch too much of Stallone, Arnold, or that kind of action star growing up. Those weren't my kind of action film. Raised in an Asian household I held Bruce Lee and Jackie Chan above all in terms of action stars. Although I was a bit too young to have had a strong taste for Lee's work, I've seen quite a few of Jackie's movies. I've seen both the Hollywood and Hong Kong style of his work and some I couldn't name for you but I could describe the iconic action scenes.

In Rumble, Jackie plays a young man visiting New York City for his uncle's (Bill Tung) wedding. He decides to stay and help Elaine (Anita Mui) who has just bought his uncle's supermarket. When a gang of thugs start trouble at the store Jackie (because his character's names don't tend to matter we'll call him Jackie any way) soundly trounces them and a revenge war begins. During his time helping at the store he befriends a young boy Danny who is confined to a wheelchair. Unbeknownst to Jackie, Danny's sister Nancy (Francoise Yip) is the gang leader's girlfriend but he wins her over. They all get tangled into a deeper plot of stolen diamonds and crime syndicates.

The late Anita Mui had the same sense of comedic timing I've seen in every film. She could play a scene straight and serious and with a simple exclamation and an expressive face she could cut the tension. The beautiful Canadian actress Francoise Yip is a pretty face but her character was pretty flat. In fact most of the characters had absolutely no development and mainly served as extras or line fillers between Chan's action scenes. It would have made for a more compelling story had they cut most of the gang stuff but focused more on Nancy and Danny. The whole diamond plot was a whole other level they could have reserved for another movie.

Rumble was shot  in Vancouver for under $8 million, I honestly thought it would have been a lot more considering the destruction wrought by that pesky hovercraft. The ending scenes alone would have been the mighty costly. They probably didn't spend much on sound though as the dubbing is quite poor as expected from Asian crossover films at the time. I guess shooting in Canada really is that cheap.

The terrible English dubbing and lack of sensible plot or character development would have tanked any other film. Thankfully for martial arts action films, the choreography is where it really shines. Jackie, originally a stuntman, and his revered stunt team know how to sell an action movie. The fight choreography is a beautiful dance that combines martial arts and silly props.

He is second to none and his creative and often comedic fight style in film helped innumerable Asian actors and actresses break into the industry.