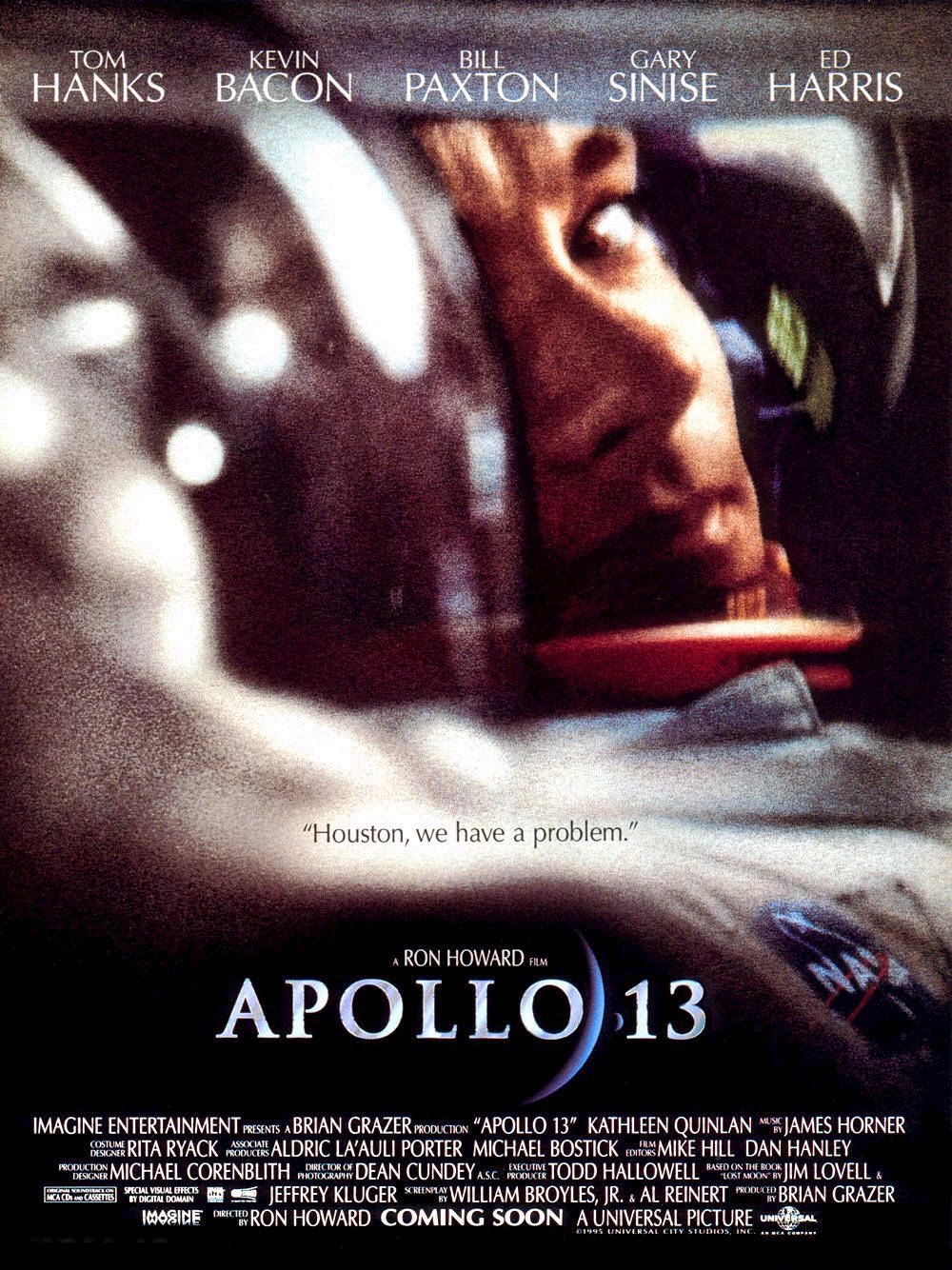 One week down just another three months to go....

First, here is an odd set of coincidences for you. In the past week I've watched three movies (and two yesterday) that have featured the song Spirit in the Sky by Norman Greenbaum. Guardians of the Galaxy was the first, yesterday I watched Remember the Titans and Apollo 13 which played the song whilst the three men were in the command module.

This is one of Ron Howard's best works. Jim Lovell (Tom Hanks), Fred Haise (Bill Paxton), and Jack Swigert (Kevin Bacon) go up on the Apollo 13 space mission. Swigert replaced Ken Mattingly (Gary Sinise) as the pilot of the command module just a few days before launch. Mattingly was exposed to the German-measles (Rubella) and was going to be a risk to the mission had he gone up. Things go south when an explosion on board causes them to vent oxygen and forces them to change plans. They abandon hope of ever going to the moon but are fighting to survive and return home.

The main four guys Hanks, Paxton, Sinise, and Bacon all do a wonderful job portraying real life heroes. The only thing that was weird was seeing Ed Harris playing Gene Kranz with that haircut but we can't blame Ed for that.

It's not too hard to ignore the few historical inaccuracies. Howard did as much as he could to make it as technically accurate as he could while taking just a few liberties for dramatic effect. He plays up the tension well and if things had gone exactly as they had in real life it wouldn't have been nearly as entertaining a movie. For the most part the movie makes NASA staff just look panicked. I'm sure they were but they just had little composure during the movie. Howard used mission transcripts almost verbatim for the conversations between the command module and Houston. One of the biggest differences, albeit a small grammatical one, is when Tom Hanks says the tagline phrase "Houston, we have a problem". This phrase has been used time and time again in colloquial speech but it's actually not what Jim Lovell said. The phrase was "Houston, we've had a problem". A tiny difference, I know, but imagining the number of times we've said it wrong for nearly twenty years, it adds up.

As with most historical movies, the ending is already spoiled by the true events....and Wikipedia. It is still a fantastic movie to watch and technically very well done.