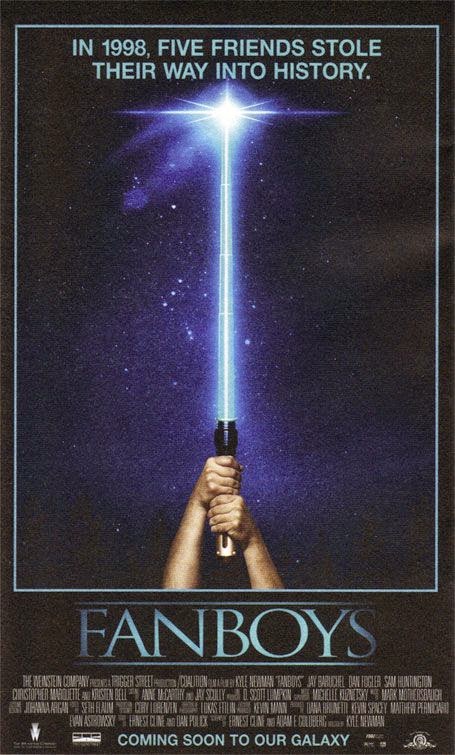 This is for all the Fanboys and Fangirls who attended FanExpo this weekend in Toronto.

The backdrop is Ohio, Halloween 1998, six months before the release of Stars Wars Episode I: The Phantom Menace. Two estranged best friends will find each other at a Halloween party after three years apart. This is the night their lives will change forever. Linus (Chris Marquette) and Eric (Sam Huntington) were best friends for as long as they could remember but after high school Eric decided to grow up. Eric stopped illustrating and concluded his interest in comic books to work for his father as a used car salesman. He left his friends behind, he matured, whereas his friends Linus, Windows (Jay Baruchel), Hutch (Dan Fogler), and Zoe (Kristen Bell) all live as the titular Fanboys (and fangirl) clinging to their perhaps ill-founded dreams. The day after the party Windows and Hutch tell Eric that Linus has cancer and has three months to live. Eric, determined to make amends with Linus decides that the four boys act on their ridiculous plan of stealing an early print of the film from the Skywalker ranch. At first reluctant to go, Linus joins the team and their quest begins. Along the way they bust up some Trekkies, pick up Zoe, and get super high with Danny Trejo, but finally make to the ranch.

The ending is really quite touching and it's worth watching even if the first 70 minutes don't capture you.

Marquette and Huntington are the bright spots in this film. Windows and Hutch, or maybe even just Baruchel and Fogler, are trying too hard to get laughs because they are desperate not to just be group filler opposite Linus and Eric. Even though Kristen Bell may seem a little out of place, I buy it. She is a weirdo in real life so it wouldn't surprise me if she was a fangirl at heart.

Seth Rogen has the best parts in the film as he plays three separate characters without any effort to hide the fact. In one scene they highlight it and they have him beat himself up. We also see amusing cameos from William Shatner, Kevin Smith, Jason Mewes, Ray Park, Craig Robinson, Will Forte, Danny McBride, Jaime King, Danny Trejo, Billy Dee Williams, and Carrie Fisher.

There is a short scene about ten minutes into the movie that I think is pure gold. It can't be more than a few minutes and it shows Linus and Eric arguing about how Eric abandoned them all after high school. It instantly turns into an argument about whether Luke had a thing for Leia and they are completely derailed. It is a snapshot for the theme of the movie. The movie on the surface is about Star Wars fandom but it's more about rediscovering your passion and rekindling old friendships. The movie serves as a decent emotional release if you're an easy cry and is enjoyable if you focus on Linus and Eric. Looking at Kristen Bell helps the movie too because she's pretty.