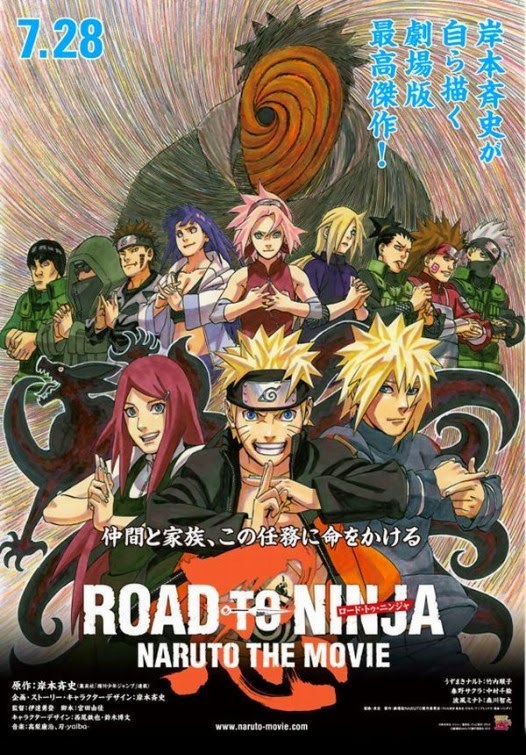 You may not know this but I like a good anime from time to time. I haven't watched nearly enough or any significant variety so for me it's been mainly Naruto. I haven't haven't gotten around to binging on any others so if you have any suggestions I'd love to hear them.

I'm not sure why I don't read the manga. I guess it might be that when I do get too bored waiting on filler in the anime I have the option to binge. The manga is quite a bit ahead of the anime and I can only imagine it's going to start to wrap up in the near future. At that point I'll binge until the end to avoid any spoilers.

Here is a warning. If you have gotten this far and are not into Naruto or anime in particular, most of the next paragraph may not make a lot of sense.

Road to Ninja is the sixth (of what I assume to be seven movies) starts as Naruto and his Hidden Leaf compatriots fight off the previously thought to be deceased Akatsuki. All of the Hidden Leaf ninja get praise from their parents. All except Naruto, due to his lack of parents and Sakura, because her parents like to give her a hard time. They end up at the park talking and complaining about their situations when Madara appears and sucks them into his Limited Tsukuyomi Genjutsu and they find themselves in a weird backwards world. Everyone has a completely different personality like the aggressive and angry Hinata, the cat lover Kiba, the skinny Choji, the bug hating Shino, and most notably the playboy Sasuke. The most dramatic changes are that Sasuke never left the village, Naruto parents are still alive, and Sakura has lost hers. Although it seems enticing to Naruto and Sakura to stay, they quickly realize they have to stop Madara and escape back into the real world. The problem is they are up against more than just Madara.

In non-specific terms it's an alternate reality situation, so we're talking about things like the new X-Men timeline, The Butterfly Effect, or something like The Wish episode from Buffy.

It was a bit unsettling seeing this alternate world but when you spend over ten years and nearly 600 episodes getting to know these characters it's bound to be a bit of a shock. The episode entitled Prologue of Road of Ninja aired in Japan on May 2, 2013 and is follows the events of the movie but in the standard universe. Although I watched the movie after the aforementioned episode, the movie released nearly a year before on July 28, 2012.

Interestingly enough, the English dubbed version of the movie will very soon have a theatrical release on August 29, 2014 in North America. However, unless you want to rip out your own ear canals and drink until you forget, I wouldn't watch it. I'm sorry to those who work on it but the English voice acting is, for the most part, appalling. Do yourself a favour and watch it in Japanese, it creates a more authentic sounding atmosphere.

If you enjoy the anime or manga and for some reason haven't gotten this far go watch the episode and then watch the movie.