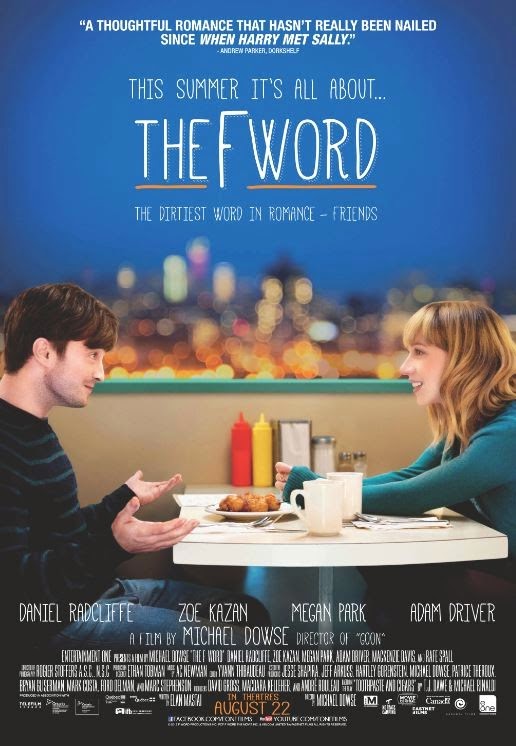 Released in the States and in the UK as What If, stars Daniel Radcliffe and Zoe Kazan knock it out of the park with The F Word.

Filmed and actually set in Toronto, unlike so many others trying to pass T.O. off as other cities, the story begins at a party. This is where not-so-recently broken hearted Wallace (Radcliffe) brushes off his rusty social skills and strikes up a conversation with the adorable and irresistible Chantry (Kazan). They have a great time, featuring a minimum of awkward moments, but to his dismay he finds out she's taken. Chantry and her boyfriend Ben (Rafe Spall) have been together five years and she finds it difficult to meet new male friends due to her relationship status. However, against all odds Chantry and Wallace find themselves becoming great friends. But can men and women really be just friends? Yes, I believe so. On rare occasions this can happen. Unfortunately for Wallace, this isn't one of them and he has to decide on whether he really just wants to be friends.

The story has been told time and time again and it is all very predictable but the brilliantly written screenplay gives it another life. Director Michael Dowse, probably best known for another Canadian film Goon, worked magic on this one. He had a lot of help though, most of all from the writing. Elan Mastai adapted the screenplay from a 15 minute Canadian mini-play Toothpaste and Cigars written by TJ Dawe and Michael Rinaldi. I'm not sure who originated the style of dialogue seen in the film but as for the Gilmore Girls-esque 100 minute screenplay I have to give credit to the former. As a side note, Mastai started in features writing the screenplay for MVP: Most Vertical Primate. It just goes to show that people can change.

I was first charmed by Zoe when she appeared as Meryl Streep's youngest daughter in It's Complicated and in another supporting role in Josh Radnor's happythankyoumoreplease. I was excited to see this movie just to see her. On the other hand this is first role I've seen Dan in since Harry Potter and I worried that his time as a wizard stunted his acting range.

They were both lovely, both individually and most importantly together. Zoe seems so genuine in her role and surprisingly Dan has some great comedic timing. As remarked in the movie he really is quite pale and sickly looking. I'm not saying he has to get some colour but it might stop scaring the children away.

The fast talking, witty banter, and quick quips form the basis of the comedy portion of this rom-com and it is undeniably wonderful. They kept me laughing throughout the film and it never seemed too slow. The two stars play perfectly off supporting actors Adam Driver, Mackenzie Davis, and Megan Park to keep the audience smiling. The romance has its moments and finds its final footing in a great, not to mention hilarious, climax as Wallace and Chantry exchange very particular gifts.

The F Word is one of my favourite rom-coms in quite some time. I enjoyed the enhanced level of comedy because it wasn't excessively stupid or overdone. It is a great date movie or you can just go see it with some friends. Either way, I recommend it wholeheartedly and you won't be disappointed. Unless you have no soul.