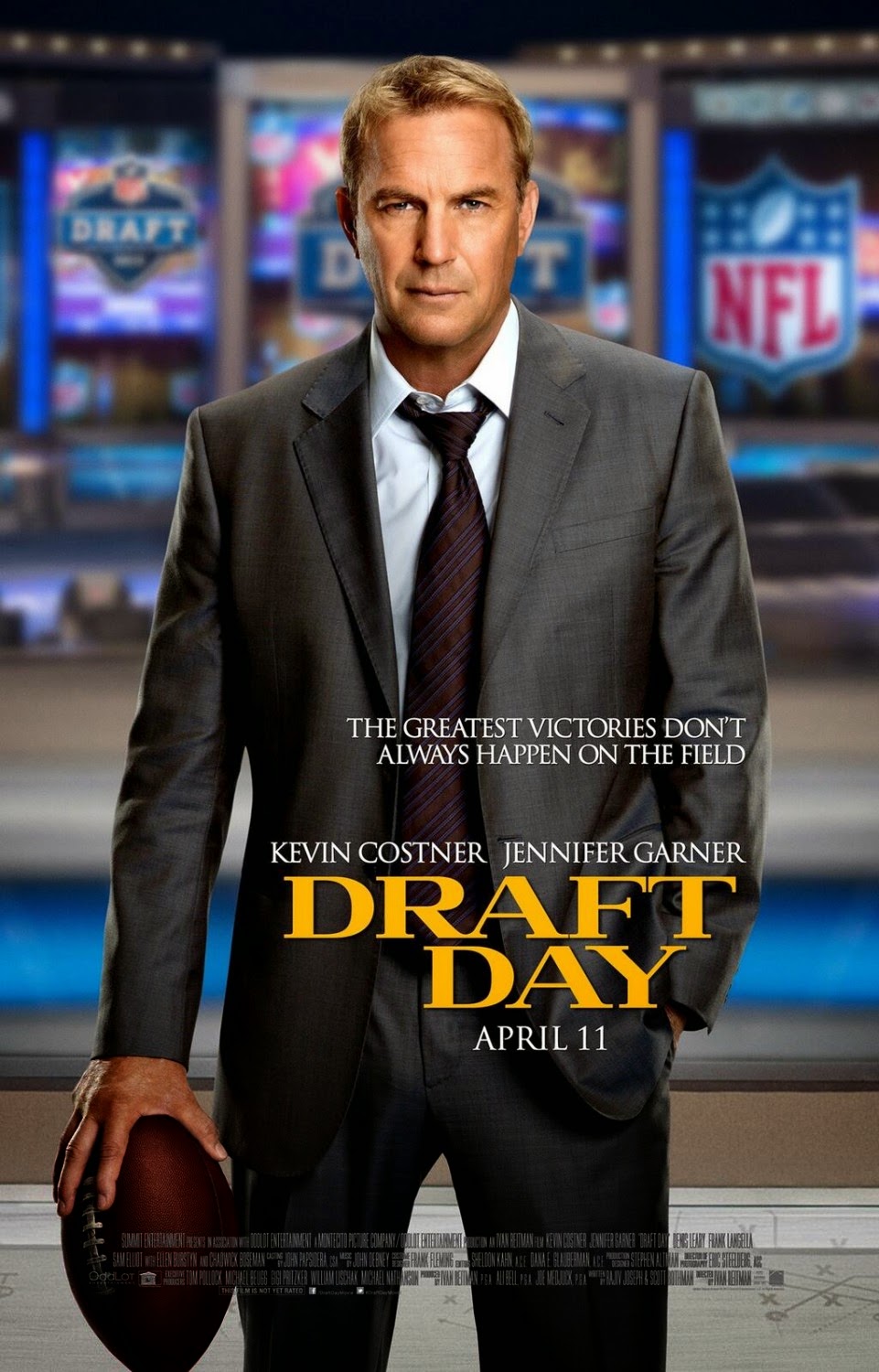 I realize as I'm writing this that the word "day" appears in the title a little too often for my liking but I'm a stickler for format consistency.

Draft Day follows General Manager Sonny Weaver Jr. (Kevin Costner) on the titular day in 2014 with just under 13 hours on the clock. Sonny manages the Cleveland Browns and the fans are hungry for something new after their previous disappointing seasons. Sonny has just lost his father, Sonny Weaver Sr. and has learned that he is going to be a father. His secret relationship with Ali (Jennifer Garner), one of the teams lawyers, only adds to his troubles. With only the 7th pick he is in danger of getting fired by the owner (Frank Langella) if he doesn't make a "splash" at the draft. Sonny wants to draft Vontae Mack (Chadwick Boseman) at 7. Mack brings great defensive prowess and energy whereas Coach Penn (Denis Leary) wants running back Ray Jennings (Arian Foster) for his offence. We see Penn and Sonny butt heads more than once during the day and Sonny's day just keeps getting worse. He makes a trade for the number one pick in order to get rookie QB Bo Callahan (Josh Pence) all the while alienating current QB Brian Drews (Tom Welling). The future of the team is looking bleak and the clock is ticking so Sonny has some work to do.

The main problems I have with this movie are solely based on Sonny's character and overall plausibility. As an audience we're supposed to want to root for Sonny but time and time again he seems to just stumble through and gets lucky. The main revelations of the film aren't even his and he simply gives it some attention when it's almost too late. Yes he has strong instincts and those instincts landed him in a world of trouble by the end. Thankfully, through implausible draft day trades and the miraculous happy ending formula, everything turns out great.

Kevin Costner has picked up some bad habits in his old age like phoning in performances. Recently I've seen him "try" to act in 3 Days to Kill and Jack Ryan: Shadow Recruit. He did us a favour putting on his pants for Draft Day and although it's no Field of Dreams it's also no Waterworld. Costner dons the role of a man stressed about his father's passing, his impending fatherhood, as well as the fate of the Cleveland Browns and his responsibility to the organization and the city. He pulls it off. Something he doesn't pull off is his romance with the lovely Jennifer Garner. I know they put a lot of make up on Costner and larger age gaps have occurred in film but it just seems a little off in this instance. Fortunately, Garner's character Ali is cold and aloof towards Sonny for the first half of the film so that helps ease some awkward tension.

Denis Leary is as unlikable as ever. He has one of those faces you want to punch and I was waiting for Costner to do so several times throughout the film. That being said he's supposed to be Sonny's foil and so in fact he does what he was made to do. Be an ass.

Ellen Burstyn plays Sonny's mother and although she gives a perfectly fine performance her character isn't nearly as complete as she could have been. Barb Weaver is more so a means for better explaining Sonny's relationship with his father and to better flush out Costner's role. The first I saw of Burstyn was her performance in Requiem for a Dream. Barb is a lovely elderly woman but it's hard for me to dissociate her from that portrayal of a mad and desperate woman cracked out on amphetamines.

There are some great cameos and small roles by Sean Combs, Terry Crews, Tom Welling and  that I quite enjoyed. For a moment Welling made me forget who he was and although his screen time was short he made the most of it. Also, I have to add that Griffin Newman as Rick the Intern almost stole the show.

The movie is predictable and implausible but still entertaining. I enjoyed watching the drama unfold between the players, the staff, and Sonny slammed into a corner. The end scramble at the draft is reminiscent of the trade deadline scene in Moneyball except slower and dramatized to hell. I especially liked it because I could put it on in the background and still not miss a thing. I did want to give it my undivided attention in the last half hour though. It's a drama about the NFL Draft, even if you aren't into sports it's still entertaining but it does help to be somewhat versed in some of what is going on technically. Draft Day is surprisingly good for a movie I thought would be garbage.