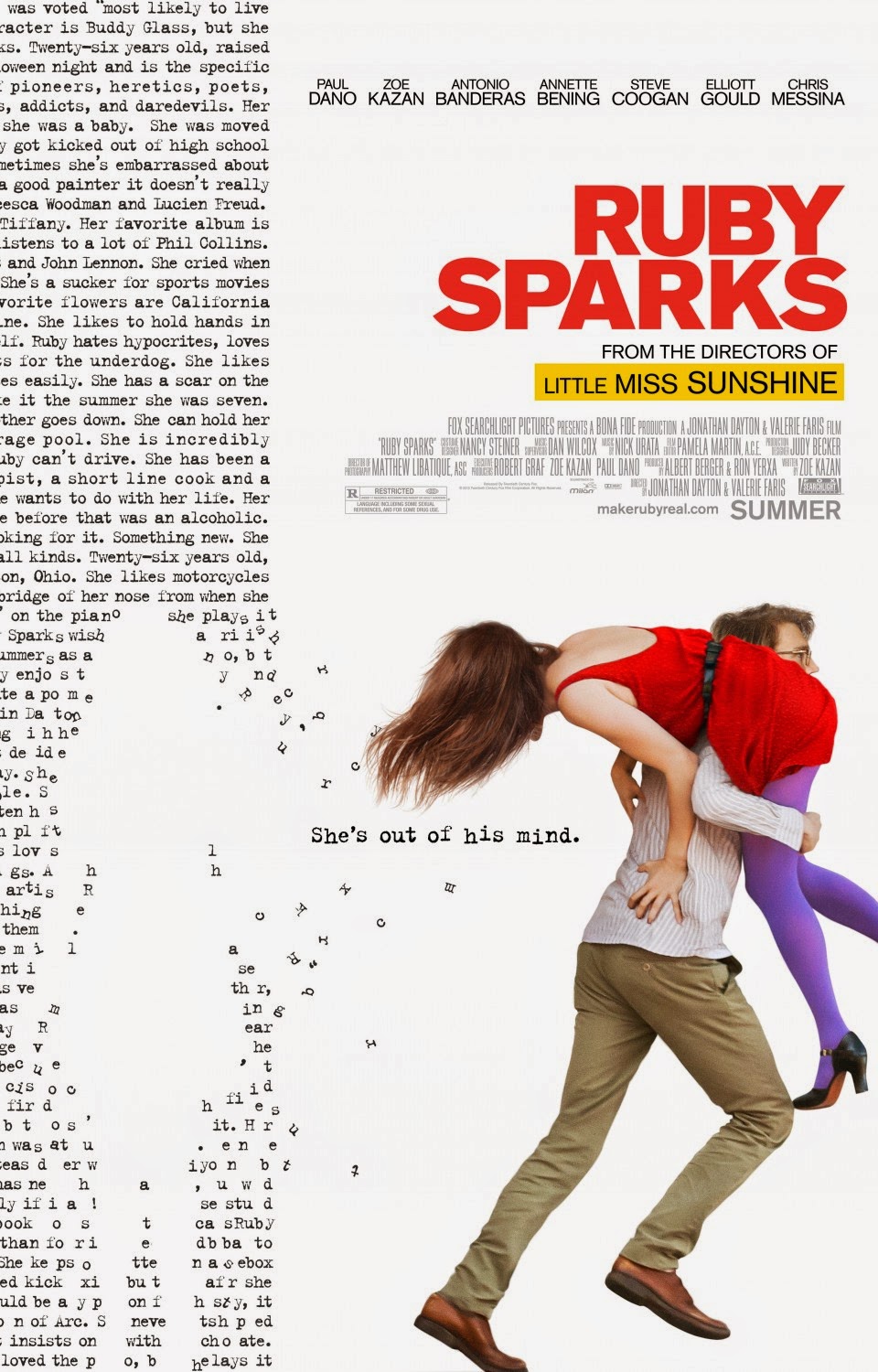 I was reminded the other day that I still haven't gotten around to watching Ruby Sparks. It has been sitting on my hard drive for over a year and I decided to finally get to it.

The reason I wanted to watch this one is because it is written by and stars the unbelievably adorable Zoe Kazan. Her co-star is her long time boyfriend Paul Dano who I've never exactly warmed to but won me over with this performance.

Calvin Weir-Fields, a high school drop out, wrote the great American novel at age 19. He was thrust into the limelight and has since struggled to live up to the title of genius he loathes so much. Now ten years since his first novel he finds himself blocked, incapable of putting pen to paper. However, he finds himself dreaming of this quirky, perfect girl and regains the fire to write about her. He is ecstatic to finish his work and starts to fall in love with her, Pygmalion style. This is when he sees his dream girl come to life and Ruby Sparks is standing in his apartment. He is clearly going insane but when others reveal that they can see her, he realizes that the best thing to ever happen to him, he's created. They have a strong bond and a blissful relationship because that is what he manifested for himself - but when she begins to want to have a life outside of him, he struggles with handling it like a regular human being and controlling her with the words he writes for her.

Kazan and Dano play off each other brilliantly and you can see their real life chemistry. Kazan has the much harder yet enviable role of playing the unpredictable and entertainingly malleable Ruby. The exciting scenes following Ruby's mysterious appearance are my favourite. They encompass the first climax of the film and it is so fun to watch Dano freak out as he miraculously "produces" a woman played by his girlfriend. Supporting our two lovers but more specifically just Calvin are Chris Messina, Steve Coogan, Elliott Gould, Annette Bening, Antonio Banderas, and Aasif Mandvi. Other than Gould as Calvin's shrink, most of the characters don't add to the progression of the plot but a romantic comedy with only two people would be pretty boring.

There are a lot of little things that I am not good at describing that draw me into this movie. The fact that Scotty, Calvin's dog keeps dragging articles of women's clothing into the house as a build up to Ruby's arrival is unnecessary yet I couldn't imagine the movie without it. Zoe Kazan's mostly impeccable French is so attractive. French really is a sexy language. There are plenty of other small bits and allusions tying different points of the movie together but you should watch it for yourself.

In terms of writing it seems that Ruby is a manifestation not only for Calvin to fall in love with but someone who embodies how he wish he could be. It even goes a level further up because Zoe wrote the script and the fact that Calvin writes her character in the story. It's a weird Moebius strip kind of cycle.

It's definitely overly cute but it features some pretty intense dramatic scenes that help to balance out the tone of the film. I'd watch it again in a heartbeat and I probably will after this.