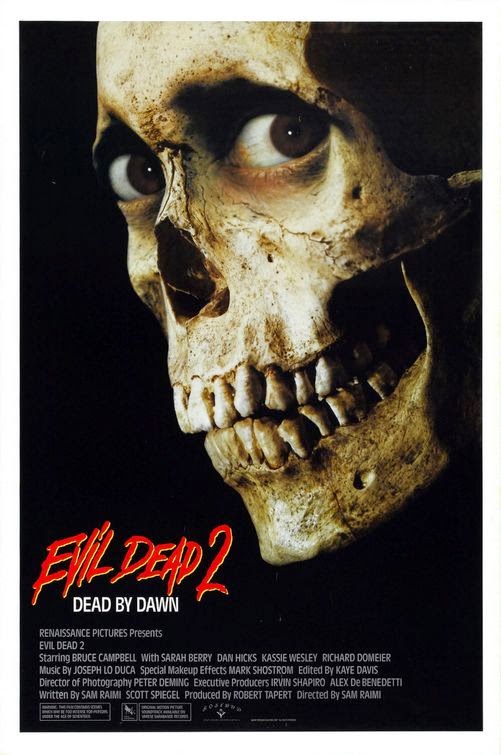 Evil Dead II (Dead by Dawn) is by far my favourite of the trilogy and the perfect mix of horror and comedy. Albeit this style of horror is quite dated but it still gives me the creeps. This is Sam Raimi's best work to date.

For all intents and purposes the story reverts to where we began in The Evil Dead. In the sequel we only see Ash and his girlfriend Linda come up to the cabin. Ten minutes is all it takes to recap what the first movie entailed. Two researchers and their guides return to the cabin after finding more pages from the ancient Necronomicon. They find the paranoid and deranged Ash trying to kill them. After they all figure out that evil demons are to blame for all of this craziness they struggle to find a way to survive.

The acting is way over the top but that is the style they are going for and it suits a comedy-horror well, emphasis on the comedy. Vader's got nothing on Bruce Campbell's prolific exclamations of "Noooooo!". We see it several times in the movie and most notably at the end.

I do have to applaud the make up and prosthetics in the sequel. They were underwhelming in The Evil Dead but they hit the nail on the head in this one. Ted Raimi returns to play a possessed dead woman so they have that going for them.

There are a lot of movies I like and share my opinion on but this is one that would strongly suggest watching. If you only watch one of this trilogy watch Evil Dead II. It recaps the first movie entirely and unlike Army of Darkness is not just an amalgamation of jokes and silliness. It gives a great spin on the horror genre and it is very tame if you're like me and don't handle today's horror well. I wouldn't say you're missing out but Evil Dead II is a film that has made a lasting imprint in horror and....yeah you're missing out.

Besides, the following scene is one of the greatest scene of all time and that alone is why you should watch it.