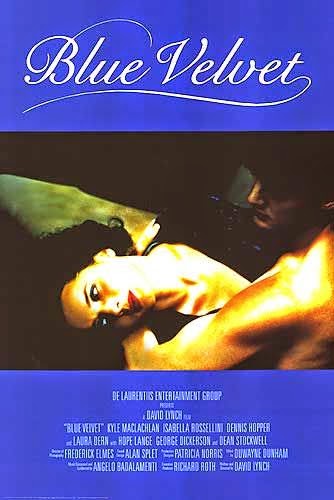 For some reason I had the impression going in that this would be a romantic movie. I could not have been more misinformed.

Director David Lynch hasn't made too many big moves since Blue Velvet. His greatest works were in the past with Eraserhead and The Elephant Man. Not that I've seen either of them so I can only pretend like I know what I'm saying.

Despite this, I can safely say that I could understand roughly 20% of what was going on in this movie and why it was happening. I understand the direction and style Lynch was going for but it didn't catch me as much as it could have. So here is the run down of what I could decipher.

After his father suffers a stroke, Jeffrey (Kyle MacLachlan) returns from college to his small home town of Lumberton. While walking in a field around his neighbourhood he finds a decomposing human ear. He brings it to a detective in town and quickly becomes fascinated in the unravelling mystery. Helping him, albeit reluctantly, is Sandy (Laura Dern), the detective's daughter. They soon discover a dangerous plot swirling around lounge singer Dorothy Vallens (Isabella Rossellini) and deranged sociopath Frank Booth (Dennis Hopper).

It has found critical acclaim and I can fully understand where those people are coming from. Unfortunately I didn't connect with it as much as I wished I could. I was literally throwing my hands in the air mouthing the words "What is going on?!" constantly during this two hour film. It was still entertaining though and I applaud it for trying to show that there is a bizarre and shady underbelly to many things that look pristine from the outside. What struck me though was that some scenes held true to an intense thriller whereas others appeared to straight out of a B-movie. It was an inconsistent film and often jumped over plot points without explaining things too well.

Maclachlan did a fine job as our star protagonist but he never seems to show emotion and that kind of weirds me out. Laura Dern could have easily been omitted from the story but the more the merrier. Also, the way she cries is so hilarious it ruins the mood in one scene where I should not have been laughing.

Dennis Hopper and Isabella Rossellini really stole the show. Roger Ebert has famously (or perhaps infamously) stated that he disliked Lynch putting Rossellini in this film. Lynch created such a degrading role for her and Ebert didn't deem this film worthy of her performance. Rossellini is verbally, physically, and sexually abused and she is portrayed as sadomasochist. I agree with Ebert in the respect that I think it was courageous performance. At this time she was trying to shake the narrow scope of being just a supermodel and trying to escape her mother's shadow. The emotion and intensity she showed in this film was overwhelming and it did her well in the industry.

Hopper had the most terrifying character. He is absolutely psychotic and we don't know what he will do next but we're transfixed on his performance. Particular intense scenes are prefaced by Hopper inhaling an unknown gas through a face mask and reverting to the pure Id of a man. Unbeknownst to me I had previously watched on several occasions a small scene of the movie as Frank shouts his love of Pabst Blue Ribbon.

I did however enjoy the soundtrack which was hauntingly beautiful, the exact style Lynch was looking for. Featured heavily are the Bobby Vinton version of the titular Blue Velvet and Roy Orbison's In Dreams. We also are treated to Rossellini's actual vocals.

I was disappointed with this film but I did still enjoy certain parts of it. This film could have been more polished and put together but I guess that is the theme and style Lynch was going for. Perhaps it deserves another watch some time down the road but it is just not my cup of tea. However, if you want to watch an intense, sometimes uncomfortable, and confusing yet mesmerizing movie give it a go. Just don't watch it with your parents. That might be a little weird.